:::::::::: ASSOCIATION (experiments on) :.
E. B. TITCHENER (Cornell University)
Experimental work upon association of ideas falls under the following heads:

(4) Scattered experiments only exist upon associativeness, i.e. the conditions under which ideas are liable to be associated, and upon the capacity of a given idea to arouse an associated idea.
Literature: MÜNSTERBERG, loc. cit.; PILLSBURY, BIRCH, in Amer. J. of Psychol., &c. See KÜLPE, Outlines of Psychol., §§ 27-33.

:::::::::: ASSOCIATION (in aesthetics) :.
J. H. TUFTS (Chicago University).
As an aesthetic principle, association is used to explain aesthetic value by deriving the pleasure felt in the presence of the beautiful or sublime, not directly from the form or constitution of the object as such, nor from the sensations it excites, but from the recall or revival of pleasure previously experienced in connection with the same or a related object or quality; e.g. a red cheek suggests youth and health, and is beautiful; red hands suggest disagreeable, labour, and are ugly.

The principle of association has been used to explain either all or only a part of aesthetic value. Some writers have had in mind the accidental associations which individuals have formed in their particular experience; others, the universal relations of natural processes and qualities. Buffier (1724) and Reynolds (1759), in connection with the view that the beautiful in nature is a fixed form for each species toward which nature inclines — a sort of mean or average – and that the ugly is a departure therefrom, drew the conclusion that ‘the effect of beauty depends on habit alone, the most customary form in each species of things being invariably the most beautiful.’ We admire beauty for no other reason than that we are used to it. Alison (Essay on the Nature and Principles of Taste, 1790), while recognizing that association cannot account for the effect of beauty unless the associated elements have intrinsic pleasing quality, developed the working of the principle in great detail, and was followed by Jeffrey, who asserted that ‘beauty is not an inherent property or quality of objects at all, but the result of the accidental relations in which they may stand to our experience of pleasures or emotions.’ Any object may become beautiful in this way. Stewart (1810), while rejecting the extreme form of the theory as held by Reynolds, agreed in the main with Alison, and made a specific application of the principle to explain how the word ‘beauty,’ which originally referred to objects of sight only, came to be applied ‘transitively’ to perceptions of other senses. Spencer (Princ. of Psychol., ii) accepts the general principle ‘under an expanded form,’ which would include not merely our own individual associations, but those of the race, transmitted by heredity. Spencer, however, does not use this as the sole principle of explanation.

The same is true of Fechner (Vorschule d. Aesthetik, 1876), who has given the most extended recent discussion. He emphasizes especially the constant and universal associations found in nature — colours with grass, sky, or fire — as contrasted with accidental or individual experiences. The principle, so far as it implies a conscious recollection, was criticized by Volkelt (Der Symbolbegriff in d. neuesten Aesthetik, 1876), and has been reaffirmed in the sense not of conscious recollection or comparison of separate elements, but as ‘the implicit relation existing between different ideas,’ by Stern (Einfühlung u. Assoc. in d. neuren Aesthetik, 1898). See also Thomas Brown, Philos. of the Human Mind, 124 ff.

:::::::::: ASSOCIATION (in education) :.
C. DE GARKO (Cornell University)
A purposive comparison of newly presented facts with other related facts already known; a phase of inductive teaching that leads to the perception of a general truth; a stage in Herbartian method. See METHOD (in education).
Literature: McMURRY, The Meth. of the Recitation, chap. vii.

:::::::::: ASSOCIATION (of ideas) :.
G. F. STOUT (Oxford); J. Mark BALDWIN (Princeton University)
[Lat. ad + socius, companion]: Ger. (Ideen-) Association; Fr. association (d’idées); Ital. associazione.
A union more or less complete formed in and by the course of experience between the mental dispositions corresponding to two or more distinguishable contents of consciousness, and of such a nature that when one content recurs, the other content tends in some manner or degree to recur also.

Aristotle, in his treatise on Memory and Reminiscence, recognizes the principle of association, and distinguishes association by similarity, by contrast, and by contiguity. The doctrine is further explained and illustrated by ancient commentators on Aristotle and by the Schoolmen. In the period of the Renaissance, Ludovicus Vives is distinguished by his careful treatment of this topic. It occupies a very prominent place in the psychology of Hobbes. The phrase ‘association of ideas’ was first introduced by Locke; but he seems to have had no insight into its general psychological importance. Berkeley was the first to extend the principle of association so as to make it cover not merely the sequence of ideas in train, but also the formation of percepts and higher states. Hartley proceeds further in the same direction, and so becomes the founder of modern ASSOCIATIONISM (q.v.).

:::::::::: ASSOCIATION (nervous) :.
C. L. HERRICK (University of New Mexico)
The process by which the activities proper to several centres of the central nervous system are brought into a state of mutual influence or interdependence. The process of neural association is probably at the bottom of all mental processes more complex than the simplest sense presentation, and is accordingly much wider than the psychological term association of ideas. Cf. ASSOCIATION FIBRES.

:::::::::: ASSOCIATION (social) :.
J. Mark BALDWIN (Princeton University); G. F. STOUT (Oxford); F. H. GIDDINGS (Columbia University)
Ger. Association (1), Verein, Gesellschaft (2); Fr. association (1), compagnie (2); Ital. associazione.
(1) The spontaneous being together of creatures, in regular ways, without regard to the mental states which actuate them; that is, without regard to the presence or absence of COOPERATION (q.v.) on their part, or to its degree when present.

Association used in this sense is a sociological rather than a psychological term. It applies to social and gregarious life looked at by an outsider rather than as involving the recognition of it by the beings themselves. When used at all — it were better avoided altogether, unless qualified as ‘social’; cf. AGGREGATION — it should be very carefully defined, seeing that one of the elements of conscious social and gregarious life is the association of ideas, a very different conception; and the confusion of the two is sometimes made. For example, Giddings (Princ. of Sociol.) contrasts psychology as the science of ‘the association of ideas’ with sociology as the science of ‘the association of individuals.’ For a direct working out, however, of an analogy between the two, see Bosanquet, Philos. Theory of the State. chap. vii.

Literature: see the titles given under SOCIOLOGY.

(2) An organization to promote an object or to realize a purpose, e.g. The British Association for the Advancement of Science, The American Psychological Association. Legalized or chartered associations are called Companies.

Rousseau first clearly distinguished between association and aggregation. In his Contract Social, chap. v. § I, he says of a society held together by force ‘c’est, si l’on veut, une agrégation, mais non pas une association.’ ‘In the situation of an ignorant labourer . . associating with no one except his wife and his children, what is there that can teach him to co-operate?’ (J.S. Mill, Diss. and Discussions, i. 193). This usage continually recurs with reference to all possible modes of friendly and useful association in the Nicomachean Ethics of Aristotle.

:::::::::: ASSOCIATION FIBRES :.
C. L. HERRICK (University of New Mexico)
Those fibres which connect different parts of the brain. More specifically fibres (usually collaterals) which unite different areas of the same hemisphere of the cerebrum as contrasted with commissural fibres, such as connect corresponding parts of the opposite hemisphere via the callosum and precommissure. For a diagram of the latter relation see SPINAL CORD (Fig. 4). For illustration of the course of the more definite association tracts cf. the figure on p. 79. 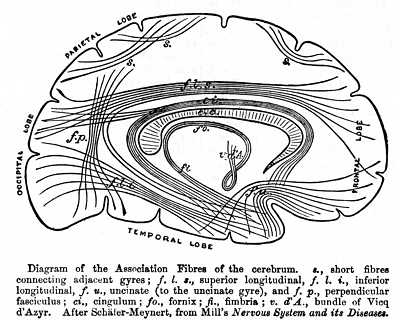 The association fibres apparently develop late in the ontogeny, and the perfection with which the higher processes of perception, conception, judgment, &c., are performed may reasonably be supposed to be conditioned on the completeness with which the neural associations are provided for. Senile return to the simpler range of associations may result from the atrophy of the more remote connections.

:::::::::: ASSOCIATIONISM :.
G. F. STOUT (Oxford); J. Mark BALDWIN (Princeton University)
Ger. Associationspsychologie; Fr. associationisme; Ital. dottrina psicologica dell’ associazione.
The theory which, starting with certain simple and ultimate constituents of consciousness, makes mental development consist solely or mainly in the combination of these elements according to certain laws of ASSOCIATION (q.v.). According to this theory, rigidly carried out, all genesis of new products is due to the combination of pre-existing elements. Cf. COMPOSITION THEORY, and MIND-STUFF THEORY.

We may quote from Hartley (Observations on Man, 1749) as at once the founder and, together with James Mill, the most typical representative of modern associationism: ‘Sensations may be said to be associated together when their impressions are either made precisely at the same instant of time or in the contiguous successive instants. . . . Any sensations, A, B, C, &c., by being associated with one another a sufficient number of times, get such a power over the corresponding ideas a, b, c, &c., that any one of the sensations A, when impressed alone, shall be able to excite in the mind b, c, &c., the ideas of the rest’ (Pt. I, prop. 10). By frequent repetition of this reproductive process ‘the simple ideas of sensation run into clusters and combinations; and each of these will at last coalesce into one complex idea, by the approach and commixture of the several compounding parts. . . . If the number of simple ideas which compose the complex one be very great, it may happen that the complex idea shall not appear to bear any relation to these its component parts. . . The reason of this is that each single idea is overpowered by the sum of all the rest, . . .’ as ‘in very compound medicines the several tastes and flavours of the separate ingredients are lost and overpowered by the complex one of the whole mass. . . . One may hope, therefore, that by pursuing and perfecting the doctrine of association, we may some time or other be enabled to analyse all that vast variety of complex ideas, which pass under the name of ideas of reflection and intellectual ideas, into their simple compounding parts, i.e. into the simple ideas of sensation, of which they consist’ (prop. 12). ‘Admitting the powers of leaving traces and of association, compounds of mental changes will arise from simple bodily ones by means of words, symbols, and associated circumstances’ (prop. 33). ‘The passions must be aggregates of the ideas, or traces of the sensible pleasures or pains; which ideas make up, by their number and mutal influence upon one another, for the faintness and transitory nature of each singly taken’ (prop. 89). Hume, whose Treatise on Human Nature was first published ten years before Hartley’s Observations, is the first among English writers clearly to distinguish between association by contiguity and association by similarity. He adds to these causality, and considers himself to have given a complete list of the conditions of association. The chief interest of his work, however, lies in his attempt to give an explanation on the lines of associationism of the psychological origin of the categories of causality and individual identity. James Mill (1773-1836) works in an original manner on the lines of Hartley. In him associationism culminates. Its later representatives, J. S. Mill and A. Bain, are by no means pure associationists. J. S. Mill breaks away from the old tradition in his doctrine of ‘mental chemistry,’ and Bain does the same in a different way by laying stress on the importance of subjective selection as determining motor activity and attention.